Toby Coles is a trumpet player based in the UK . For the last twenty years, he has worked predominantly in London’s West End theatre scene and has held the trumpet chair on shows including Chitty Chitty Bang Bang, Evita, Lord Of The Rings, Spamalot, Sister Act, Wizard Of Oz, Matilda, Wicked and is currently lead trumpet on Disney’s Frozen at the Theatre Royal, Drury Lane. He works regularly as an extra with the BBC Concert Orchestra and the Royal Opera House Orchestra and is also the trumpet player in the Michael Nyman Band. * He has performed regularly with London Brass and can also be heard on a few film scores including Harry Potter (Half Blood Prince), Shazam, and Matilda. 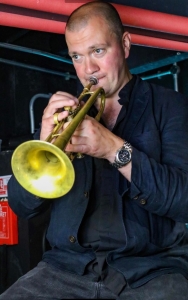