Dr. Kevin Tague is Assistant Professor of Trumpet and Jazz at the Kitt School of Music at Northern Arizona University in Flagstaff, Arizona where he teaches applied trumpet and directs a jazz ensemble.

A versatile musician, Dr. Tague regularly performs in a variety of styles. As a classical musician, he is a member of NAU’s Elden Brass Quintet and performs with the school’s new music ensemble, Ensemble Flageolet. He has also played with the acclaimed Des Moines Metro Opera Orchestra, the Las Vegas Philharmonic, the Henderson Symphony (NV), the Jackson Symphony (TN), and as principal trumpet of the Paducah Symphony Orchestra (KY). Dr. Tague has been featured as a soloist with bands and orchestras across the nation as well as with the Ibis Ensemble in Trinidad and Tobago. He has performed under the baton of conductors including Peter Nero, Marvin Hamlisch, Carl Topilow, and Colonel John R. Bourgeois.

As a commercial musician, Dr. Tague is a member of the NAU faculty jazz sextet and has extensive experience as a lead trumpet player. He has been heard on the world-famous Las Vegas Strip, with musical theater productions in Chicago and Denver, and the national tour of Disney’s Beauty and the Beast. Dr. Tague has also played with many headlining acts including The Temptations, Take 6, Mannheim Steamroller, the Cab Calloway Orchestra, Kirk Whalum, The O’Jays, Chuck Mangione, the Lon Bronson All-Star Band, Neena Freelon, Toni Tennille, Marvin Hamlisch, and others. Dr. Tague can be heard as lead or principal trumpet on recordings for Klavier Records, Dazzle Recordings, Albany Records, Interscope Digital and others. 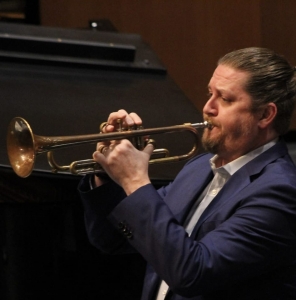